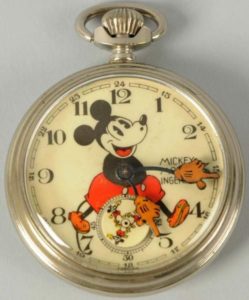 SO WHAT IS the first great Hollywood movie or movie character people started collecting? Was it Charlie Chaplin, Marilyn Monroe, or Star Wars? Bet the answer might surprise you.

We don’t think it was any of the above. In fact, we think it probably was human, and it also wasn’t Star Wars – although that 1977 movie was most likely the first to actually market the characters in a big way and create a whole new collectible.

The answer is most probably Mickey Mouse. Disney combined the magic of the animal kingdom with the big screen and created memorable characters that were sought by children and adults alike. The 1932 Klondike Kid movie poster sold at auction in 1995 for $57,000. Disney created generations of children who adored their loveable family. Movies spawned books, toys, dolls, trinkets, and decorations. That made Walt almost as famous as his mice.

As the movie industry grew, so did its history (makes sense). As in anything else, once you have history, you have historians – people who want to keep a record of that history. In the movies, we have some people within the industry keeping the memories alive and fueling the price and demand for older material – whether it be the films themselves, the theater posters and advertisements, or the “kitsch” (a nice word for junk) that went along with it.

Take some examples: Director Martin Scorcese collects posters. He hangs them in his New York offices. (If he gets enough he may finally get an Academy Award for the collection). Leonardo Di Caprio collects mementos from Star Wars and horror films. (Don’t know if he collects Titanic memorabilia, but he should have). Michael Jackson collected all kinds of Hollywood kitsch, favoring (this is really true) the Three Stooges and posters of child actors.

Our point is not the absurdity of the collector, but the vastness of the possibilities. It ranges from the silent screen to Bond….James Bond. One can take a pick of characters, themes, products, ephemera, or bizarre categories like studios, artists, stars or manufacturers. Not everything has staying power, however. Watch out for those products that are specifically manufactured before the film releases – a sure sign that they’re out to get quick money (kind of like refusing to allow the critics to view a film before it’s public debut). Not every little premium given away at a fast food place is worth keeping.

Notwithstanding the junk and tinsel, the field is great! It has stories, imagination, and weirdness – to say nothing of the people who collect this stuff. We’ve even seen self-proclaimed Jedi Masters with their light sabers standing in lines at appraisal shows waiting to convince us they’re real.

Guess what? Maybe they are. Maybe we’ve created an alternative world that is just as vibrant, colorful and dangerous as the one we live in every day. Maybe that’s why people collect the things they do. It gives them comfort, nostalgia, and good vibes. Why, “we might not be in Kansas anymore, right Toto?”

So, here’s to red slippers and blue suede shoes!

National Appraisal Consultants
Leon and Brian are the Partners of National Appraisal Consultants, LLC. We were expert witnesses in the Nixon Watergate Presidential Papers Case. We serve as consultants and appraisers for the IRS, US Marshal’s Service, Department of Homeland Security, FBI, US Customs & Border Protection. We provide appraisals and consulting advice for the largest insurance companies in the US. We are trained, tested, and certified appraisers...Read More